CHERRY seedlings require fertilization with higher content of organic matter, which are biologically active. Preferably, the soil reaction should be neutral to a weakly acidic. Highly carbonate and alkaline are not suitable for cherry cultivation, since there is a disorder in iron nutrition, i.e. leaf chlorosis.

Of the climatic conditions for cherry cultivation, temperature is of particular importance, especially in the absolute minimum during winter dormancy, at the beginning and at the end of vegetation. The distribution of rainfall during vegetation is very important in the stage of fruit growth, and especially in the phase of cell swelling and ripening. It is quite resistant to low temperatures, withstands up to -28 C during winter.

Cherry (Lat. Cerasia) is a deciduous woody plant from the Prunoideae subfamily whose fruits of the same name are used in human nutrition as fruit. It is usually about 20 m high. In Europe, it can rarely be found in nature, so this type of tree is endangered today. Cherry is domesticated and has great importance in fruit production.

Cherry can reach a height of 30 to 32 meters and the diameter of the tree can be 50cm or more. The bark is light to dark brown with characteristic horizontal lines, which become more and more thick with time and cracks appear in these places.

At first, while the tree is still young, the lines are hardly noticeable, and with time the bark thickens, and the lines turn into cracks. The bark can also peel off into horizontal lines.
The leaves are elliptical or ovate in shape, jagged at the circumference, about 10 cm long, about 5 cm wide and of feathery nervatures. They have characteristic reddish-brown glands on the pedicle, near the leaf.

The flower is white and on a long pedicle. Buds are ellipsoidal and pointed, dark brown and covered with several scales. The flowers grow abundantly in large numbers and are densely arranged and clustered. The characteristic of the whole subfamily, including the cherry tree, is the structure of the flower, which has one fertilizing leaf. There are two embryonic seeds in the ovary, of which often only one develops into seeds.

The fruit is a typical monocarp drupe, it is round and burgundy, pink or yellow. It is about 1 cm in diameter and can be larger in cultural varieties. The cherry fruit is extremely pulpy and sweet.

Cherry is widespread in central and western Europe, the Balkans, the Apennines and the northern part of the Iberian Peninsula. It is also found in the Mediterranean, but less often. In the southernmost parts of Europe, it grows at slightly higher altitudes. In Asia, it can be found in the Caucasus, Crimea and parts of Anatolia.

Cherry is of great importance as an agricultural plant because it is domesticated and is one of the most represented plants in fruit growing, because of its delicious fruit, which are used in fresh and processed state. Today, a large number of cherry varieties, which are very common fruit crops worldwide, are created by artificial selection and crossing. There are many reasons: cherry does not require special construction during cultivation, it is not demanding in terms of pruning, and is resistant to many diseases and pests.

Cherry is known from prehistoric times, when it was known to people from the Bronze Age, 2000 years BC. In the 8th century BC, the cherry was already domesticated and people used its fruit. The first cherries are believed to have been grown in Anatolia and Greece. In addition to being used in human nutrition, cherry fruit are also eaten by animals, which thus contribute to the propagation of cherries in nature. 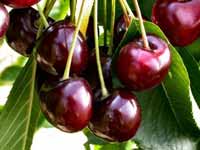 Ripening time: Second half of May 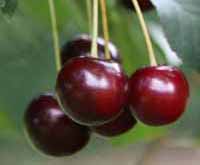 The Sunburst variety is one of the highest quality varieties in the world. It blooms mid-late, has good fruitfulness, the fruit is large, heart-shaped, with a bright reddish color, the fleshy part is less firm. It is a self-fertilizing variety. Requires regular pruning.

Ripening time: First half of June 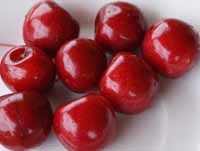 It is of good and regular fruitfulness. The fruit is medium-sized, burgundy.

The Regina seedlings are originally from Germany. The fruit is large, red, the fleshy part is firm, resistant to cracking. It tolerates winter frosts and is tolerant of cold weather.

The Lapins seedlings are originally from Canada. One of the most beautiful cherry varieties and it is dark red. The fruit is large, round, bright red, the fleshy part is very firm. It is self-fertilizing.

Ripening time: Second half of June

The Kordia seedlings are originally from the Czech Republic. It is of good fruitfulness. The fruit is very large, heart-shaped, dark red. The fleshy part is red, firm, crispy, juicy, sweet and sour, of pleasant aroma and high quality. It is relatively sensitive to cracking. 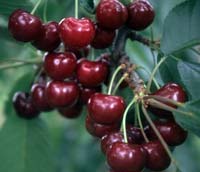 The Black Star seedlings are a variety created at the Bologna Fruit Institute by crossing the Lapins and Burlat varieties.

The trees are medium lush with a well-branched crown.

It blooms early and is self-fertilizing.

The fruit is large, heart-shaped, dark red, moderately juicy and sweet. The fruit is tolerant of cracking, so it is recommended for commercial growing. 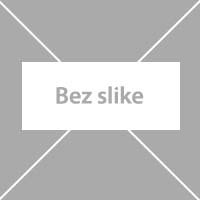 The Glorija seedlings have no description 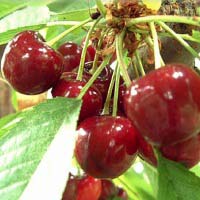 Stella is a late cherry variety, ripening around June 20.

The fruit is large, dark red, the fleshy part is firm and dark red, of excellent quality.
It is self-fertilizing and very fruitful.