PLUM seedlings are the most represented type of fruit seedlings in Serbia and have the greatest economic importance. The variety that is most often grown is Stanley.

In addition to its high and versatile value, good reception and high quality, this distribution was also facilitated by easy reproduction of shoots and self-fertilization.

Plum is a tree from the rose (Rosaceae) family. The term “plum” most commonly represents varieties of domestic plums (Prunus domestica L.), which are numerous. Most varieties are used for human nutrition in the form of fruit, and some are used because of the tree.

Across Europe, an alcoholic drink of plum brandy (often referred to as plum or plummy amongst the Serbs), which in our areas is considered to be a Serbian national drink, is made from the fruit of this tree. Fruit are often used for marmalade and jelly (plum jelly). Large areas of plum orchards can be seen in Western Serbia and Šumadija. FAO statistics says that the average production of plums in Serbia for the period 2000-2009 is 486,791 tons per year. The production declined at the beginning of the period, but suddenly rose in 2003. In 2009, it amounted to 662,631 tons.

The long-term goal of crossing domestic plums (P. domestica L.) is to create new varieties adapted to the agro-ecological conditions of the temperate continental climate. New varieties should be resistant to cold winter temperatures, late spring frosts and droughts. There is a permanent orientation towards the production of Plum pox virus tolerant and resistant varieties and the most common fungal diseases (Polystigma rubrum (Person) De Candolle and Puccinia (Tranzschelia) pruni-spinosae (Pers.) Diet.) Preference should be given to self-fertilizing varieties, of regular and abundant fruitfulness. Regarding habitus, selection should be directed to production of varieties of wide-pyramidal, moderately dense crowns with wide branching angles and elastic branches that do not break under the load of fruit.

Table varieties should have large fruit (over 100 g) with blue epicarp, attractive appearance, yellow, firm, juicy, sweet-sour mesocarp separating from the bone which tolerates handling and transportation well, while maintaining freshness and good appearance and quality for a long time.
Drying varieties should have medium-sized oval fruit (30 to 50 g), contain over 20% soluble dry matter, have a solid yellow fleshy part that separates from the bone, tolerate handling and transport well, and not crack in the rain, to dry easily and quickly without cracking or releasing juice.

In order to extend the season of drying and using plums in the fresh state, efforts should be made to obtain varieties with as early as possible and very late ripening.

Varieties for other types of processing or varieties of combined traits (compote, jam, jam, sweet, brandy) should have a high sugar content, good taste, adequate color of the epicarp and mesocarp, consistency of the fleshy part and produce regularly and abundantly.

So far, 13 plum varieties have been recognized at the Fruit Reseach Institute in Čačak: 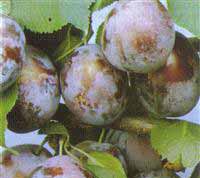 The fruit is large, oblong, of aromatic odor and of good quality. The fleshy part is yellowish, firm, juicy and very sweet. Great for drying. 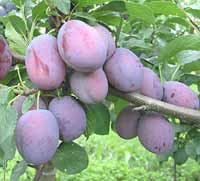 This is another newer species. The fruit is large, ovate and purple-blue. The fleshy part is yellowish, has a sweet-sour taste and a large bone. Becomes fruitful relatively early. Good pollinators are Čačanska lepotica and Stanley.

Ripening time: Second half of July 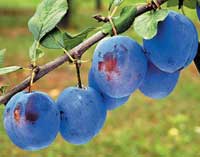 These seedlings are of domestic origin. It is partly self-fertilizing to self-fertilizing. The fruit is very large, ovate and dark blue. The fleshy part is firm, juicy and tastes good. Produces fruit regularly and abundantly, and becomes fruitful in the second or third year after planting. 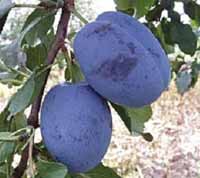 This is another domestic variety. Very fruitful. The fruit is medium-sized to large, round. The fleshy part is yellow and has a sweet and sour taste, sticks to the bone. Good pollinators are Čačanska lepotica and Čačanska rodna. 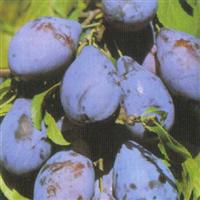 The Stanley seedlings are originally from the US. It is partly self-fertilizing to self-fertilizing. The fruit is large, elliptical and dark blue. Produces relatively large fruit and becomes fruitful early. The bone is large and easily separated. 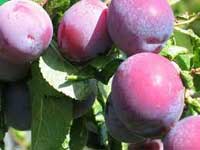 These seedlings are originally from Central Europe. The fruit is small to medium-sized, round, the epicarp is purple-green, blue on the sunny side. The fleshy part is greenish-yellow, sour-sweet in taste. Good pollinators are Požegača, California blue, Stanley. 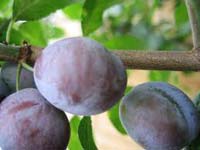 These seedlings are originally from the US. This variety blooms mid-early and is very lush. Very fruitful, the fruit is large, elliptical in shape and purple. The fleshy part is of good taste, yellow-green. 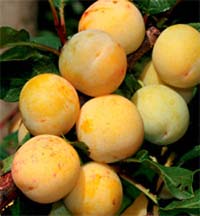 These seedlings belong to a very fruitful variety of plums. It is resistant to diseases and pests so it is good for organic production. The colors are yellow, red and dark, depending on the variety. The fruit is most commonly used for brandy.