The pear seedlings, after plums and apples, are among the most represented fruit species in Serbia.
It belongs to the group of profitable fruit trees. Pear production in our country is still scarce, so good prices are regularly achieved. The cost of growing a pear plantation, as well as regular production, is much lower than that of an apple. Investments in pear planting can be repaid in 5-7 years.
Pear is a genus of woody plants of the family Rosaceae, whose fruit of the same name are used in human nutrition. Species of this genus grow in temperate regions of Europe, Asia and Africa. The trees are of medium height (10-17m), mostly deciduous, with simple and alternately arranged leaves (2-12cm long)). The fruit is a special form of berry - pomum, with single-layered (in species from Sect. Pyrus) or multilayered epidermis (in species in Sect. Pashia) and often numerous sclereids (stone cells). Taxonomically, the genus divides into the two sections mentioned.
"Wild" species of the genus Pyrus can hybridize, similar to other genera in the Apple (Maloideae) subfamily, but the natural habitats of these species do not overlap and thus prevent the occurrence of hybridization. With the neolithic spread of agriculture, humans artificially combine the "wild" species and begin with domestication. There are two names for domesticated (domestic) pears - Pyrus communis (European) and Pyrus pyrifolia (Far Eastern).
These two species (and their cultivars) originated through two independent processes of domestication, before 500 B.C. Some cultivars of European domestic pear may have been created by hybridization of P. communis with P. reqelii.
Pears are used for the production of a very high quality brandy - pear (perry), and the most famous pear brandy is of the William variety. In addition to brandy, pears are also used in the preparation of stewed drinks, jelly, marmalade, preserve, as well as an additive for various fruit cakes. 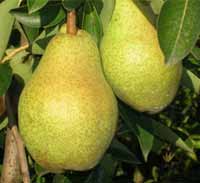 The William's seedlings are grown on all continents.

It is very adaptive, very fruitful and has excellent fruit quality. The variety is originally from England. It is used for the production of William brandy and juices. 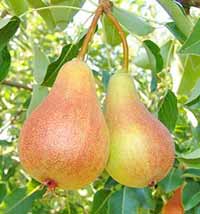 The June Beauty seedlings are originally from Italy.

The fruit is medium-sized, the skin is smooth, yellowish-red. The fleshy part is yellowish in color, sweet, juicy and very aromatic. Regularly fruitful. 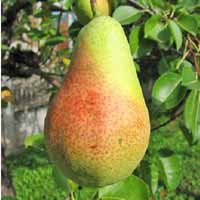 The Bosc seedlings are originally from France.

The fleshy part is semi-melting, with plenty of stone cells. The taste is inconsistent. The aroma is poorly pronounced. Storage capability is good. Can be stored in regular storage up to two months. 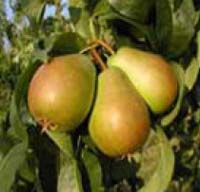 Description:
The Santa Maria seedlings are originally from England.

The fruit is medium-sized to large, the skin is greenish-yellow with a pronounced redness on the sunny side. The fleshy part is white, juicy, with a slightly sour taste, with a little aroma. 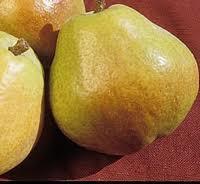 The Kieffer seedlings are originally from the US.
Erwinia-resistant. 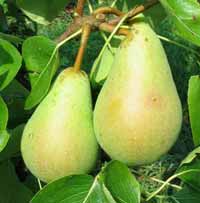 The Butirra seedlings are originally from Italy.

It blooms mid-early. Medium lush. It is well pollinated by June's beauty and William varieties.

Becomes fruitful early and then produces fruit well and regularly. The fruit is large. The epicarp is soft, tender, greenish-yellow and pink on the sunny side. The fleshy part is whitish, firm, sweet, very tasty.

Ripening time: Second half of July 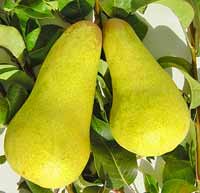 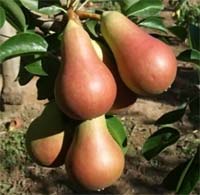 Carmen represent one of the best new pear varieties.
The tree is very lush, of excellent frutifulness. One of the most requested and most popular varieties for large plantings in recent years.

Its fruit are very tasty, with an average weight of about 200 g. The fruit are very resistant and can be stored for up to 2 months in cold storage plants. The tree is very lush, of excellent frutifulness. 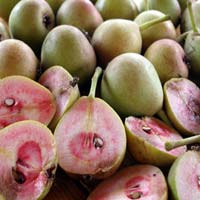 The fleshy part is burgundy, and it resembles a watermelon, which is how it got its name.
The taste is sweet-sour. Yields are regular and plentiful. It belongs to a group of older, autochtonous pear varieties.